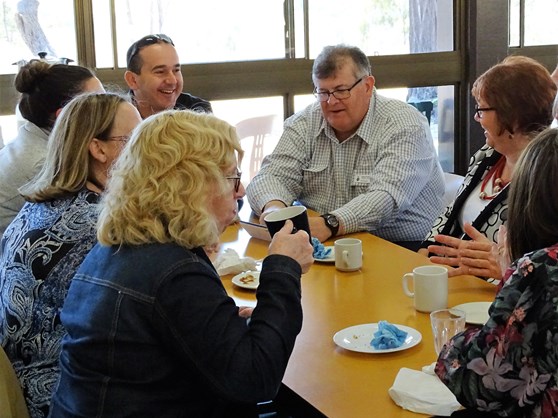 Staff engaging at the Reflection Day

Toowoomba Catholic Schools Office staff recently held a Reflection Morning to commence their own local engagement for Plenary 2020.  The theme of the morning was “Permission to Speak”.  Staff had the opportunity to openly listen to, and dialogue, with one another in an informal setting as they discerned how the Catholic Church in Australia might best move into the future.

The Reflection Morning began with facilitator, Angela Travers, Education Officer: Religious Education leading a prayer followed by an introduction to the upcoming Plenary Council and its importance to the future of the Church.  Everyone was encouraged to speak up, that it was okay to be open and honest with each other in their opinions of the Church.  Participants were also invited to “listen to God by listening to one another,” and to “listen with the ear of our hearts”.

The audience’s first interactions were in small groups.  The groups were changed often and deliberately chosen to get people to move out of their comfort zones, to speak up and engage with each other sharing stories of faith, life and church.

Fr Hal Ranger was a guest speaker, explaining the mechanics of the Plenary, the three phases: Preparation, The Deliberations and Implementation.  He shared stories of his faith and previous councils of the Church that were enacted to bring about change.

Several staff commented that the Reflection Morning was the best one they had attended to date. Staff were energised by the buzz of the room, interested in hearing each other’s stories and to see so many similar themes coming through.

The diverse backgrounds of members of the Catholic Schools Office; some Catholic, some not; some active members of the Church; others for whom the Church had lost its appeal for various reasons; still yielded opinions that were very similar.  Participants believed the Church needed to change and many of the same issues were discussed as were presented at the Second Vatican Council, over 50 years ago.

When asked about the feedback that was collected on the day, Dr Ken Avenell, Acting Director: Formation and Identity and facilitator of the morning said, “The diversity of personnel delivered a range of feedback however the strongest thing to come up was the desire for inclusiveness.”

The Toowoomba Catholic Schools Office will present the feedback from the Reflection Morning in their submission to the Plenary.