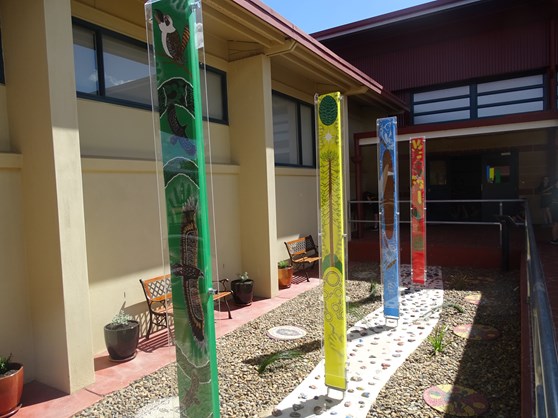 On Friday, 13 March a new Sacred Space was opened and blessed by Parish Priest, Fr Franco.

This unique Sacred Space created on the upper campus of St Mary’s School, Warwick is an area for students to sit and read, talk to friends, take time out or just enjoy the surroundings of this meaningful area.

Another aspect of the Sacred Space are eleven intricate mosaics that were created by local artists Nathan Charles, Dylan Charles and Brenda Parsons. The mosaics depict aspects of Aboriginal life before and after colonisation by Europeans.

Finally, there is also a contribution to the space by many St Mary’s students. Those who were present last year for NAIDOC celebrations painted a river rock and these make up the rocks in the river in the Sacred Space.

Special guests in attendance included Mrs Delphine Charles, mother to Nathan and Aunt to Dylan, the mosaic artists and Mrs Brenda Parsons, local aboriginal artist who was a mosaic artist.