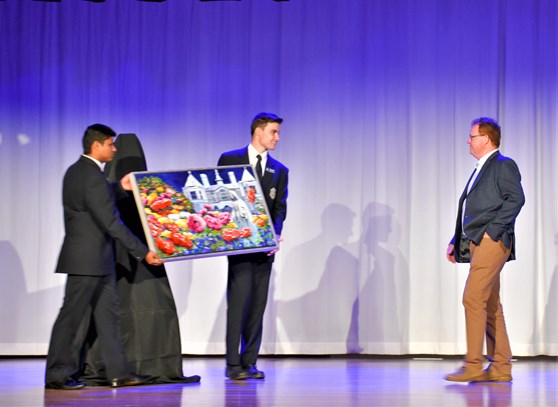 School Captains Alastair Doljanin and Dhairy Shah present Michael Newman with a painting as a memory of the College.

The College captains presented Michael with a painting of the College that included the Brothers’ House which was the first building built at the College in 1899, a statue of the Virgin Mary and flowers, signifying liveliness. The evening concluded with a blessing from Bishop Robert McGuckin.

“Michael is taking leave next term before moving to Brisbane with his family to take up a new position as Headmaster of Marist College, Ashgrove from 2021. After 17 years in the Diocese, including 7 as principal of St John’s College, Roma, Michael leaves a reputation as an outstanding leader and educator. His sphere of influence extends well beyond his local community to colleagues within the system and across the State. Michael, his wife Lauren and their three children have been wonderful ambassadors for Catholic education and faith leaders within the diocese. We will miss them very much and wish them well in the next chapter about to unfold,” said Dr Pat Coughlan.