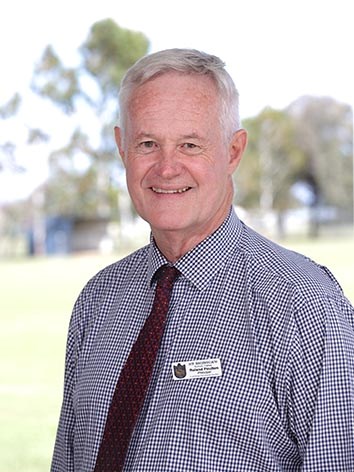 Starting at St Mary’s School Goondiwindi in 1980, Roly served at several schools in the Toowoomba Diocese as a primary teacher prior to becoming an Assistant Principal in 1994. A stint as Acting Principal at St Patrick’s Allora in 1996 was the beginning of  his school leadership career, with  principalships at St Stephen’s Pittsworth, St Mary’s Warwick, St Anthony’s  Toowoomba and  St Monica’s Oakey.

“During my time as a school principal, I found support and encouragement from an organisation deeply founded on Christian principles, from my interactions with talented peers and my understanding family,” said Roly.

“My faith has also nourished me in what has been a very people centred profession.”

Roly also acknowledged the committed and talented teachers he has worked with and the influence and impact they have. “Many times I have been in awe of the efforts teachers in our Catholic schools will go to in making the educational experiences of their students more exciting, enjoyable and effective. Seeing teachers work collaboratively with their colleagues to plan, teach and evaluate; learning from each other; this has been what has inspired me over the years.”

When asked what he believes makes Catholic Education distinctive, Roly’s response was resolute, “To me, making the message of Jesus real and lived within the school community provides a tangible model for students to follow in their relationships with their classmates and the wider community. It engages them in relationships where human dignity is central, and the unfailing love of God is ever present. It is through these relationships that you get to witness and contribute to what is most rewarding — the immense pride of young students when they reach academic and personal milestones.”