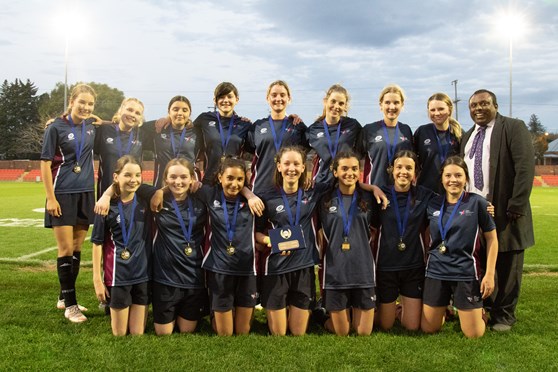 A nail biter to the very end, both teams put up a solid fight. With a score of nil all at half-time, the girls were privileged to make use of the stadium dressing rooms that housed the Roosters and Dragons just the night before! The second half of the match saw both teams return with sheer determination, and the Mary Mac girls scored the first goal! Three more goals were scored between the two teams in the final eight minutes of the game, leaving it a draw at the final whistle. Two rounds of overtime saw the Mary Mac girls put up a solid fight against Ursula’s and with minutes to go, they scored 2 consecutive goals to win their very first grand final!

Perseverance, resilience, and determination sum up the qualities of this all girls team, who came to be in 2019 as young and eager year 7 students competing in the under 15s competition. After losing every single game that first season, the girls were determined to try again, and rejoined in 2020 to win just one game. Soccer Coach, Kris Naiker said “It was more than a soccer game for the girls; they wanted to leave a legacy for future Mary MacKillop girls to aspire to.”

Soccer Coach and Assistant Principal, Kris Naiker said, “I recently listened to a speech by Yasmin Mogahed, a psychologist and motivational speaker who specialises in personal development. She said ‘Resilience means you experience, you feel, you fail, you hurt. You fall. But, you keep going.’ Our girls soccer team experienced exactly this. They kept going and that’s what learning is, both in and out of the classroom.”

As the Assistant Principal for Teaching and Learning in the Senior School, building these qualities on the fields is just as important as building them in the classroom. Mr Naiker first started as a coach in an effort to build positive relationships, to connect with students he may never teach, and create sense of College pride.

This game is a history making event for the College, forging their path as a young P-12 College in the ever-competitive environment of Toowoomba schools and sporting competitions.