Stars aplenty at the Diocese of Toowoomba Catholic Schools Office 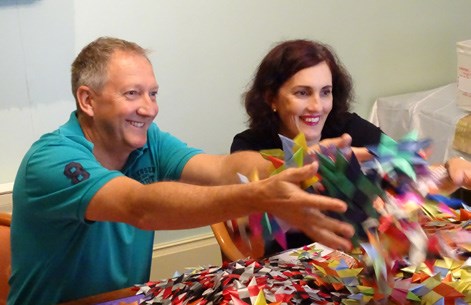 Tony Worner and Angela Travers are amazed at the quality and quantity of stars produced by the students and staff of Diocese of Toowoomba Catholic Schools for the Million Stars to end domestic violence project.

The stars aligned for the Diocese of Toowoomba Catholic Schools and the Darling Downs South West Queensland Working Party on Tuesday 19 December, when almost 3,000 stars developed by the students and staff from many schools across the Diocese were handed over for the Million Stars to end domestic violence project.

"The Diocese of Toowoomba Catholic Schools (DTCS) were approached by Cr McDonald to participate in this project, said Joanne Segond von Banchet.

"Participation in this project had a natural alignment to key principles of our social action and justice teachings within our 31 schools.

"Our teachings focus on the dignity of people being acknowledged and supported and situations such as domestic violence are recognised as acts of injustice." said Joanne.

The Million Stars Project was a great community building activity for the 14 schools who participated. Larger Toowoomba schools stepped up to help smaller remote regional schools in producing stars to contribute to the project.

Students took the time to teach other students, hosted workshops in their libraries at lunchtimes, went to classes as 'buddies' to teach other students. Team leaders of the project, Angela Travers and Tony Worner, led star-making classes at the Assistant Principal, Religious Education (APRE) days to help communicate DTCS' involvement in the project.

Cr McDonald and the Darling Downs South West committee were blown away by the quality and quantity of the stars that students and staff helped produce.

TRC are looking to hold an event to showcase our stars and many others from around the region, before sending the stars to the Commonwealth Games.  USQ will most likely be the venue.

To find out more - view the Toowoomba Chronicle video.